Join LAdobe on Thursday night, June 26 at 7pm at our new location at WeWork at 7083 Hollywood Blvd. in Hollywood. WeWork is an great co-working space and a big supporter of the local tech community. Free parking is available a couple of blocks away at side streets between Hollywood and Sunset Blvds. You can also use the lot where CVS and Fresh & Easy are located at $2.25 per hour.

This is a free event, to RSVP click here –> 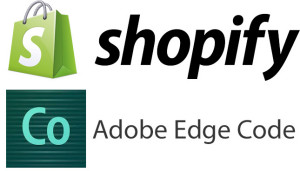 For this session, we’re going to look into e-commerce with one of the hottest e-commerce systems around, Shopify. Shopify is one of a number of self-hosted e-commerce systems with a large variety of features. But it also has it’s own programming language called ‘Liquid’, which is based on Ruby on Rails.

How difficult is Shopify and Liquid to use? How does it compare to more standard and familiar Content Management Systems like WordPress and Drupal. Our own Adam Bell of dataTV has spent the last year looking deep into Shopify and what can and can’t be done. He’ll share his advice and also how to code Liquid or any code using one of the more recent additions to Adobe’s Creative Cloud, Edge Code. Built on top of Adobe’s Brackets Open Source project, Edge Code allows you to easily edit your HTML, CSS, Javascript and in this case, Liquid, rather easily. Adam will show how both Shopify and Edge Code work together.

Well have food courtesy of IPS All-Natural Egg White Chips and drinks courtesy of Hubert’s Lemonade and prizes from Astute Graphics and O’Reilly. We hope to see you back in Hollywood for our look at E-Commerce and Edge Code on June 26th!

This is a free event, to RSVP click here –>